The Gunpowder Valley Conservancy was honored to co-host a major press event with the National Fish and Wildlife Foundation (NFWF) and the Environmental Protection Agency (EPA) at Miramar Landing Community Park in Middle River, MD., the site of a recently completed community greenway and stormwater restoration project by the Gunpowder Valley Conservancy. The press event awards recipients with this year’s Chesapeake Bay Stewardship Fund grants that support efforts to protect and restore the Chesapeake Bay.

The Gunpowder Valley Conservancy is proud to be a recipient of a $200,000 grant from the NFWF that will support Watershed Restoration and Education programs over the next two years covering over 7 acres in the Lower Gunpowder Falls, Bird River, Middle River, and Tidal Gunpowder watersheds. With assistance from our partners, the projects will mobilize communities to install stormwater best management practices, plant trees and clean up streams with a focus on the upland areas of four Baltimore County stream restoration projects.

The Gunpowder Valley Conservancy is also being recognized for expanding its Clear Creeks Project through the successful completion of the Miramar Landing Community Bay-Wise Project. In the past two years, an environmental education campaign has been underway to implement Bay-Wise landscaping practices at Miramar Landing, a diverse community in Middle River, MD.  The Bay-Wise Project utilized social marketing strategies, including free educational workshops and a cost-share program, to mobilize residents to install rain barrels, rain gardens, Bayscapes, and micro-bioretention systems to reduce stormwater runoff.

The Gunpowder Valley Conservancy completed the Miramar Landing Community Bay-Wise Project on June 30, 2017 with funding from a NFWF Small Watershed Grant received in 2015, a matching grant from the Chesapeake Bay Trust, and in partnership with the University of Maryland Extension Master Gardeners.

The Gunpowder Valley Conservancy is honored to have co-hosted this event, and extend immense gratitude to the National Fish and Wildlife Foundation, the Chesapeake Bay Program, and for our other partners including Baltimore County Department of Environmental Protection and Sustainability, the Maryland Department of Natural Resources, the Chesapeake Bay Trust, and corporate partners including BGE for their continued support. 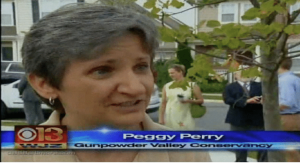